Review: Curse on the Land

Curse on the Land by Faith Hunter
My rating: 5 of 5 stars

I enjoyed the start of this new series so much I was delighted to have the opportunity to review an advance copy of the second installment. I was far from disappointed with Curse on the Land. Nell Ingram is charming and funny, a survivor we can respect. In a Yellowrock world where so much is comfortably familiar, Nell's powers are fresh and intriguing. True to the previous works of Hunter this story runs dark, gruesomely so at times, but this Soulwood series retains a hopeful quality. I could hardly put this book down -- overall, a very enjoyable read.

View all my reviews
Posted by mamaofthevalley at Friday, October 14, 2016 No comments:

Once Broken Faith by Seanan McGuire
My rating: 4 of 5 stars

(Disclaimer: I received an advanced reading copy in exchange for an honest review).


Posted by mamaofthevalley at Thursday, October 06, 2016 No comments:

Review: All the Little Liars

All the Little Liars by Charlaine Harris
My rating: 4 of 5 stars

This was a pleasure to read. The modernization of Roe's world takes nothing away from the original charm of the series and Roe remains delightful. (view spoiler)[ The plot "twist" is rather obvious but I suspect purposely so. Having some idea who the culprit was helped take the edge off what could have been a very dark tale. (hide spoiler)] All in all, another outstanding serving of comfort reading from Harris.


Posted by mamaofthevalley at Wednesday, October 05, 2016 No comments:

Truly Madly Guilty by Liane Moriarty
My rating: 4 of 5 stars

The first 2/3 of this story progressed slowly. The set up for the story and the big reveal of what happened that fateful day becomes hand-wringingly agonizing. As always, Moriarty's story packs an emotional punch -- I don't value a book that's merely depressing and upsetting and that is not what this book is, although there are certainly stretches that are both. You might be able to pin down the events of this book in a nutshell but this is a beautifully complicated story about many things -- motherhood, friendships, marriage, healing, guilt and how we survive our parents shortcomings, both large and small. I could go on and on. The last 3rd deserves 5 stars but it felt like work to get there so we'll settle on 4.


Posted by mamaofthevalley at Tuesday, September 20, 2016 No comments: This past year I read a good book by Liane Moriarty.  Actually I read every book by Liane Moriarty after being wowed by Big Little Lies.  The story relevant to this discussion, however, is What Alice Forgot - the tale of a woman with amnesia who finds herself jumped forward in her life 10 years, sorting through what her life has become and struggling to understand how she has come to be where she is.  As she picks up the reins on the life of her older self she is at times dumbfounded by the choices she seems to have made, by what she has allowed to happen. Without great thought she acts to corrects Older Alice's blunders.  After a single afternoon watching her oldest child's misery at sport practice she removes the child from the team.  She will [spoiler alert] remember it all.  She will recall why enforced sports participation seemed like a good idea; however, in that moment it is a simple straight forward matter and it is obvious what needs to be done.

I am not sure when I let youth sports become My Battle.  I am sure of one thing, though -- it is a simple straight forward matter and it is obvious what needs to be done.  Yes indeed, Mr. Gaiman, Alice did provide not just an escape, but a meaningful and educational one.

This past Fall my youngest played youth football and my oldest sat with me on the sidelines.  The world did not end.  He chose to try soccer instead where he had fun and struggled.  At times the struggling outweighed the fun.  His particular place on the autism spectrum means he has many real challenges to success with physical activities.  Now that he is getting older he is actually noticing, "Hey! Everyone else is doing better than me!".  He feels the frustration of working just as hard as everyone but yielding poor results.

Physical activity is still important.  I'm not giving him permission to do what his heart most desires and become a total couch potato.  I am acknowledging, however, that baseball with all its fine motor intricacies is not the smartest place for us to put our energies.  And I know that my younger self would say, "Duh."
Posted by mama of the valley at Tuesday, January 05, 2016 No comments:

I've always wanted my boys to play sports.  I watched my little brothers grow up playing soccer, baseball, basketball and football with my dad as their team coach most of the way.  I still have the trading cards of my little brothers in their first years of little league, little guys holding up little bats and looking more adorable than there are words for.  I could probably recite by heart my father's speeches on the benefits of team sports and I will admit that he convinced me long ago.

I can remember trying to engage Little Guy with ball play and how, from very early on, he struggled and quickly lost interest in trying.   I didn't know then what I know now - that simple things are often not simple at all for him.  I didn't know that it was extra difficult for him to plan and execute body movement or that he experiences double vision and has difficulty tracking moving objects.  With those barriers success with balls is pretty hard to get to.

Last season when I signed him up for Little League, I knew.  I knew it would be hard for Little Guy and I knew it was likely to not be a successful run.  My dreams aside, I probably wouldn't have even tried but for one very important reason -- Big Boy.   Big Boy who is smart and funny and typically developing and enjoys playing ball.  Big Boy I knew could be successful at Little League and I didn't want to deny him his chance at it.  And Big Boy was not going to want to do it unless his big brother was doing it, too.

So with great trepidation and some hope I signed them both up for T-ball and it was...just fine.  At that level the kids are little and they're all learning.  Some kids have more skills than others but there are plenty of tikes out there who aren't great.  Little Guy couldn't throw or catch well but the same could be said for other teammates.  The coaches were supportive and everything was good humored.  Little Guy was challenged in many ways and if he didn't bubble over with excitement to be playing baseball he did enjoy many parts of it and had some great experiences.

This year has been different.

By the time the season even started he'd taken a few balls to the face in the process of trying to teach him to catch.  This year before the season even started there was frustration.  A year of development and some practice later he has progressed by bits while Big Boy's progress is more significant.  Little Guy has not yet put together the larger implications of a kid 2.5 years younger out-performing him.  He just knows that he works hard and his output is not so great.  Big Boy works hard and gets a much better result.

And it's not just Big Boy.  This year almost all the kids play better.  If Little Guy hasn't noticed that I know who has -- all the parents, grandparents, aunts, uncles, cousins and friends that make up the crowd of spectators at each game.  There is more of a competitive edge to some of the peanut gallery this year.  They are not flagrantly mean but they get frustrated and say careless things that make me want to slash their tires from time to time.  They haven't crossed the line yet but every once in a while they go stand by it.

Still, if you set the difficulty of practice aside, both boys enjoy actually playing the game.  I ask myself often if I'm doing the right thing pushing Little Guy at something that is so difficult for him. Then I see his grin as he does a little victory dance on first base after hitting the ball.  I see him sitting on a bench playing rock paper scissors with a teammate.  And I remember that many things worth having don't come easy.

Of Shadow & Stone : They can't all be great books 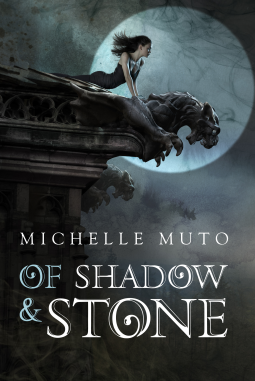 My last three book reviews were glowing and I have to admit it's been making me nervous.  It's hard to have credibility when all you ever say is "Great job!"  The problem is that I hate reading mediocre books and I carefully pick what I spend my precious little reading time on.  Hence when I was sent an advanced reading copy Of Shadow & Stone along with works by tried and true favorites it's not really surprising that I got to it last.  Eventually, though, its day did come and alas, my 5 star review streak has come to an end.

Of Shadow & Stone by Michelle Muto is not terrible.  I've read worse.  I've read worse just this year.  Most of the book feels like a better than average set up for a new series.  The main characters, Kate and Ian, are likable and Shadow Wood is mysterious and intriguing.

This story suffers from premature resolution unfortunately.  By the end everything is tied up neatly.  Too neatly, too soon.

Fantasy writing requires a certain amount of world building and back story in an introductory piece -- the author is giving us a new world and we must be made to understand it. A certain amount of character casting is also required -- the author is giving us new characters and we must be made to care about them.  It feels like Muto was just accomplishing those two things when suddenly everything is fixed and the story is done.

Of Shadow & Stone gets many things right but ultimately doesn't live up to its promise.

Posted by mama of the valley at Sunday, February 22, 2015 No comments: